If common sense were so common, then why is there so little of it?

We tend to follow experts’ advice even when it is nutty. Why often don’t we have the self confidence to accept that we are more sensible than some arrogant fool, just because they have a title? Where is that common sense when parents need it most, as when dealing with teenagers? By following bad advice we damage and abuse our children, waste time and stop ourselves from hearing good advice.

Maybe Albert Einstein was right when he said:

“Common sense is the collection of prejudices acquired by age eighteen.”

That possibly answers the question of where parenting experts throughout history go wrong, they lost their common sense.

If you are a parent and struggling with your child’s difficult behavior there is some common sense practical, rubber hits the road advice, with empathy and respect that really works for difficult young children and problem teenagers.

Socrates in 400 B.C. noted that parents were more concerned with careers and status than caring for their children saying, “Fellow citizens, why do you burn and scrape every stone to gather wealth, and take so little care of your children to who you must one day relinquish all?” How little has changed over the last 2400 years. Our technology is advanced, but our emotions are as base as they were then.

Plutarch, in A.D. 110, gave the advice that, “Proper measures must be taken to ensure that children shall be tactful and courteous in their address; for nothing is so deservedly disliked as tactless characters.”

Well maybe teenagers need to practice tact before they enter adulthood, but younger children are immature and behave in an immature way. So they cannot be expected to always to be “tactful and courteous.” They are still in the learning curve, and children learn intuitively by example through experience and not by “being told” by a tactless parent. A parent’s tactful behavior and showing the child respect, while being firm teaches tactful and courteous behavior by example. Trying to force the child to make them behave that way, will frustrate both parent and child, destroy their relationship and teach the child that adults are phoneys. 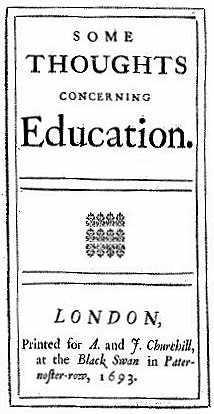 The philosopher John Locke in his treatise on education, published in 1693, “Some Thoughts Concerning Education” wrote, “I will also advise his feet to be washed every day in cold water, and to have his shoes so thin, that they might leak and let in water. It is recommendable for its cleanliness; but that which I aim at in it, is health; and therefore I limit it not precisely to any time of the day.”

Cold wet feet are character building, or so it seems Locke and a few generations of education experts thought. This is a great tactic for guaranteed hyperactivity, keeping the child constantly moving to get warm.

These words of wisdom from a great philosopher were in the most influential book on education in the eighteenth century. It was translated into the major European languages during this time, and nearly every European expert on education, including the French philosopher Jean-Jacques Rousseau, accepted this wisdom.

Some more modern experts give advice that is sure to create dysfunctional individuals.

L. Emmett Holt, in “The Care and Feeding of Children” published in 1894, wrote, “ Babies under six months old should never be played with; and the less of it at any time the better for the infant.” This is a sure way of raising children who will suffer from Attachment Disorder or Borderline Personality Disorder.

John B. Watson in “Psychological Care of Infant and Child” published in 1928, wrote, “Never hug and kiss them, never let them sit in your lap. If you must, kiss them once on the forehead when they say good night. Shake hands with them in the morning. Give them a pat on the head if they have made an extraordinary good job of a difficult task.”

If you want your child to be healthy just do exactly the opposite of what Watson recommends.

Sometimes when I read parenting advice I think of Groucho Marx who said:

It is most natural for parents to raise their children the way they were raised themselves. So if your parents showed you respect, never got angry, gave you firm but loving limits, gave you all the attention you needed, built your self esteem, and were all around perfect parents, then being a great parent will be natural for you.

However, if your parents ever had stress, expressed anger or frustration, ignored you, or fell short in any area of parenting, which is unfortunately many of us, then what comes naturally to you may be destructive for your child.

The world today is changing so rapidly and the stresses and challenges you face as a parent are in many ways different from those your parents faced raising you. If you are unsure or struggling with difficult behavior, there is common sense and encouraging advice specially aimed at different age groups and different problems:

Advice for children between the ages of 2-12.

Advice on behavior problems with teens.

The art of parenting is to teach the art of living to one’s children with empathy, respect and that so uncommon gift, common sense.

I’ll leave you with this thought:

Parents remember that there is no way to be a perfect parent, but hundreds of ways to be a good one.

There are more articles on parenting with love, empathy, respect yet firmness here.


This is an excellent resource for information on cerebral palsy.